As most people in Boston do, each morning I journey to either Starbucks, or Dunkin Donuts, or I bring coffee from home, or I get some coffee from the cafe in my school. No matter how it happens, it always happens. I get my coffee, and then my day starts.

Many times I go during rush hour, and I try to be quick because clearly the barista’s don’t care, and the people in line behind me have places to go, and I have places to go as well and I don’t want to hold up the line. 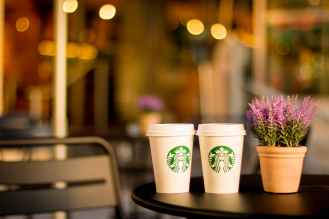 But, many other times, I will go at 9:55, right after my 9 a.m. class, and right before my internship that starts at 10. (The internship is at Channel 7 WHDH, which if you know Boston, you know WHDH is right next to Suffolk, so I’m always right on time, no need to worry.)

This morning it occurred to me how important it is to really be nice, the people taking my order are just that: people! They have feelings, and they care, and they have problems and lives, and they need love too, as important as it for them to be nice to us, it’s important for us to be nice to them.

To my point, I was at Dunkin Donuts this morning getting my Medium Iced Coffee Caramel Swirl with cream and sugar. That is always what I get when I go there. There is one woman in front of me, and she ordered 15 munchkins. The barista started putting them in a bag and she said,

“Of course, I’m sorry. That’s no problem,” The barista replied. He emptied the munchkins into the box and filled it up a little more.

He handed them over to the woman and rang her up. Right as she was about to leave, he said

“Have a great day Sweetie.”

He profusely apologized, again and again, and I felt bad for the man, he wasn’t trying to be rude, he was just trying to help her have a good day, and be nice.

She left without saying anything else, that was, after the eye roll.

Then, I ordered and as he was making my drink he said to me, clearly distressed from the rude woman before me,

“I didn’t think I was doing anything wrong.” He went on to say how he felt bad for saying that to the woman, but he didn’t think it was bad, he was just trying to be nice, and do his job well.

“You did nothing wrong, some people are just rude, they don’t care how they sound,” I answered him, trying to help him not feel bad about some woman who clearly doesn’t care about anyone but herself.

“Don’t worry about her, don’t worry, you’re doing a great job. You’re doing great.” I said, and I really meant that.

He then gave me my coffee and I thanked him. He said “Have a great day honey, and I just smiled at him and thanked him one more time.

My whole 4 minute walk to the internship I was thinking about that interaction I just had. Why couldn’t that woman just let it slide? Maybe it did make her uncomfortable, but why couldn’t she just let it slide and not go to that Dunkin Donuts again? We are in Boston, walk 3 minutes and you’ll find another. Why couldn’t she just thank him and walk away, or say you too!? Why did she find it so important to say that at that moment and maybe ruin the rest of his hour?

I truly felt bad for him, but I also felt bad for the woman who is so upset that she feels the need to bring others down. I hope that my life is never that bad that I have to be mean and rude, and I hope that I never make anyone feel like that ever, in any part of my life. I also hope that if there is one thing you take out of this, besides how weird and uncomfortable my coffee run was this morning, it’s that: BE NICE! TO EVERYONE!

My name is Liz and I am a 24 year reporter at KMVT News in Twin Falls, Idaho! I love to laugh, to love, and to engage in romance novels! I believe in magic, and I believe that everything happens for a reason! View all posts by elizabethjoyhadley

This site uses Akismet to reduce spam. Learn how your comment data is processed.